It has been reported that Bayern Munich attacker Thomas Muller has offered encouragement to Manchester United. 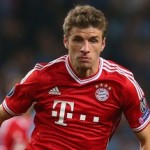 It is said that new United boss Louis van Gaal is keen on the Germany international and Muller has had his head turned.

“I’m at the point where I want to know if I am seen as an integral part of the Bayern team in view of the coming year,” he told Stern.

“I also want to know if I am in the plans of the club for years to come. Therefore, I want to talk with general manager Karl-Heinz Rummenigge.

“I’m not the type of guy who says, ‘Well, I’ve done well, but now I’ll keep my mouth shut again and again so anyone can do to me what he wants’.”