Reports are out claiming that Bayern Munich striker Robert Lewandowski will resist a move to Arsenal this summer. 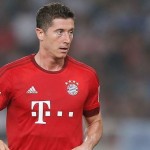 The Daily Express says it had been reported that the Gunners had made a £35million bid for the Polish front man – but Bayern have rebuffed that approach.

Speaking to Bayern’s website, he said: “I don’t believe the fans have already seen the best of me. I can, and will, be even better this season, I’m certain of that.

“It’s not always easy of course as there are so many factors involved. It’s vital we play well as a team. That’s the most important thing.

“It would be useless to me personally if I was to finish top scorer but we only come second in the Bundesliga and go out of the Champions League in the last sixteen.” Arsene Wenger Insists Arsenal Have Nothing To Fear Against Bayern Munich

Arsenal, Chelsea To Do Battle For Groningen Starlet Richairo Zivkovic