Reports are out claiming that Wolfsburg are preparing to sell Kevin de Bruyne. 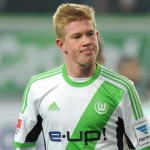 The former Chelsea star has been linked with Manchester United and Manchester City.

Speaking to Kicker, Wolfsburg chief Klaus Allofs said: “We might have to let go of certain players.

“Of course, Kevin has the potential to play for Bayern Munich. But he also needs the right conditions in order to do shine and to be given the right role. That’s the case at Wolfsburg, but I don’t know whether he fits Pep Guardiola’s philosophy.

“We got lucky that Kevin was unhappy at Chelsea when we signed him. It didn’t work out for him under Jose Mourinho. Unlike Wolfsburg, Bayern are capable of signing big names even if they are happy at their club, though.”