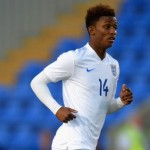 The People claims that top scouts from Bayern and leading Premier League clubs, including Arsenal, Liverpool, Everton and Manchester City, saw Gray have an outstanding game in the England Under 20’s 1-0 defeat by the Czech Republic at Shrewsbury last Monday.

The 19 year-old’s eye-catching display has confirmed his rapid development into one of the country’s most wanted young players.

He turned down moves to Bournemouth and Leicester City in the summer and signed a new three year contract with Birmingham which is believed to contain a buy-out clause worth £4.7million.