Reports have emerged claiming that Birmingham winger Demarai Gray is reportedly on the radar of German Champions Bayern Munich. 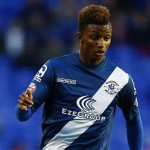 Bayern scouts joined staff from Arsenal, Manchester City, Liverpool and Everton in watching Gray in action for the England Under 20s against the Czech Republic on Monday.

Gray is understood to have a buyout clause of just £4.7million in his Birmingham contract and Bayern could now be interested in making a bid for the 19-year-old, according to reports from the Birmingham Mail.

Gray signed a new three-year deal with Birmingham this summer and it is understood his preference is to remain at St Andrew’s and help the Championship club push for promotion.