It has been reported that Bayern Munich want to ferry Tottenham ace Harry Kane away from the Premier League. 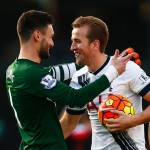 The German giants, among several European heavyweights, have been scouting Kane for much of the year.

The Sun claims that Bayern chiefs are convinced the England international is no flash-in-the-pan and want to bring him to the Bundesliga in 2016.

Bayern are willing to put £50 million on the table to convince Spurs chairman Daniel Levy to sell.

Louis van Gaal, meanwhile, has told Manchester United to ‘pay what it takes’ to bring Kane to Old Trafford in January.