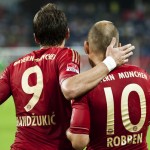 leg of the quarter-finals. Bastian Schweinsteiger should be fit after a hamstring injury.

Barcelona forward Lionel Messi has recovered sufficiently from a hamstring strain to feature in Germany, although a late decision will be made on his inclusion in the starting XI. Carles Puyol and Javier Mascherano are out and full-back Adriano is suspended. Eric Abidal is in contention after starting his first league match in 14 months at the weekend while Marc Bartra is also an option at the back for Barca.

Jupp Heynckes: “Of course I guess Messi will play tomorrow. For us Barça are not just Messi. Barça have a team of many top players. There is (Andrés) Iniesta, who is a great player – he was European player of the year – and look at (Gerard) Piqué, Xavi, etc. They have a great potential and we are preparing to face an absolute top-class team.”

Jordi Roura (Barca assistant): “Bayern have been very good in this competition. They are in great form and are a very strong team. We are not clear favourites and we have to accept that. Bayern dominated their league and have played spectacular football during the last few weeks. Both teams have a lot of experience in finals. Bayern have been in two finals in the last three years which shows a lot about them.”