German giants Bayern Munich clinched their 24th Bundesliga title in record time with a 3-1 win at Hertha Berlin on Tuesday. 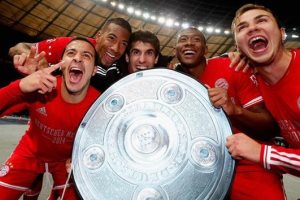 Toni Kroos and Mario Gotze scored inside the first 15 minutes to put Pep Guardiola’s men on their way.

Although Adrian Ramos pulled a goal back for Hertha Berlin from the penalty spot midway through the second half, substitute Franck Ribery’s 79th-minute goal wrapped up the win in style.

The result ensures Pep Guardiola’s side wraps up the title with seven games to spare in the Spaniard’s first season as coach, beating the mark set in last year’s record-breaking campaign by one game.

It was also Bayern’s 19th consecutive win, their 10th consecutive victory away from home, and stretched their unbeaten run to 52 games. All are Bundesliga records.

Bayern would have been celebrating even had they lost, as Borussia Dortund, who sit in second place 25 points behind Bayern, settled for a goalless draw at home against third-place Schalke.