Reports are out claiming that Manchester United are being linked with Bayern Munich winger Arjen Robben. 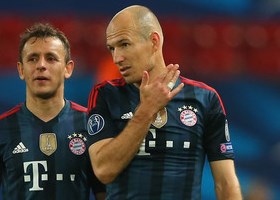 It is said that United manager-in-waiting Louis van Gaal worked with Robben at Bayern and wants to bring his fellow Dutchman to Old Trafford next season, says The Sun.

It’s suggested Van Gaal has already informed his potential employers to make the Dutch international the first signing of his United reign.