Reports are out claiming that Bayern Munich winger Arjen Robben is full of praise for Arsene Wenger despite the Arsenal manager’s criticism of him. 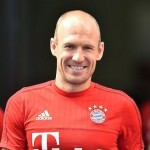 On his last appearance against Arsenal, Robben was labelled by Wenger “a great player and a very good diver” after winning a soft penalty for Bayern.

However, the Dutchman told the Telegraph: “If they lose some managers are disappointed and not always fair and realistic. Maybe one week after they say: ‘OK, maybe it was wrong what I said. But I haven’t got a problem.

“I think he’s unique. To be there for such a long time you are doing a lot of things very, very well.

“See the players who became better. Look at the way Arsenal has developed. In Holland or Germany, they always talk positive about Arsenal. Why? The way they play, no negative football, always positive technical football, wanting to make the game. I think that is a big credit to him.”