It has been revealed that Bayern Munich chairman Karl-Heinz Rummenigge is supremely confident that the German giants will hold on to the services of Mario Mandzukic this summer. 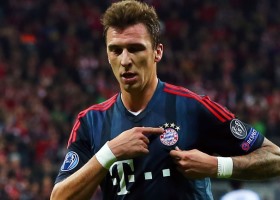 It is said that the Croatian striker could be looking to depart the Allianz Arena at the end of the season as the Bavarian behemoth gets set to welcome Robert Lewandowski from Borussia Dortmund on a free transfer.

Both Chelsea and Arsenal have been credited with a considerable interest in Mandzukic but Rummenigge suggests that European champions Bayern will be able to keep him happy.

“Mario Mandzukic is under contract with our club,” he told Welt am Sonntag.

“I am definitely aware that many clubs have started to show an interest in Mario’s services, but I believe he will be with our club way beyond the end of this season.”

27-year old Mandzukic, who joined Bayern from Wolfsburg in 2012, is under contract until June 2016.