Beating Arsenal was SO EASY – Ribery 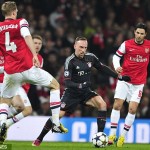 You would think that being diplomatic in winning a game against a team currently going through a phase would be a gentleman thing to do, but Franck Ribery could care less.

He stuck the boot into Arsenal by claiming Bayern Munich’s 3-1 win at the Emirates was easy.

Bayern are unbackable favourites to go through to the last eight of the Champions League after Toni Kroos, Thomas Muller and Mario Mandzukic fired the Bundesliga giants to a first-leg lead.

Bayern’s French winger Ribery said: ‘We didn’t think it would be so easy. We know Arsenal are having some problems in the league, maybe they are lacking in confidence. But we feel good and we’re delighted to have got that result.
‘We’re all working hard together, with the will to play well, to win, to defend together. It’s important to carry on like this.
‘We will have to match that performance in the return leg. We’re in good shape to reach the quarter-finals but nothing is ever over in football.’

I want Arsenal to beat Bayern Munich and progress – Villas-Boas


Tottenham Fans attacked ahead of clash with Lyon