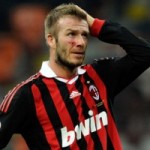 More bad news for David Beckham as he has been knocked off the top of the list of football’s highest earners, with Barcelona’s star player Lionel Messi now the best-paid player in the game.

The Englishman – who is currently out with a long-term injury – remains in second place on the list, just £100,000 ahead of Real Madrid winger Cristiano Ronaldo.

Messi’s salary is made up of a £9m basic wage, £3.6m in bonuses and a further £17.1m in personal endorsements. The Argentine has deals with companies including Adidas, Pepsi and Gillette.

The top English-based played is Manchester City striker Carlos Tevez, who comes in seventh with £13.8m, while Chelsea’s Frank Lampard is ninth on £12.7m

Internazionale boss Jose Mourinho is the best paid manager in the game with £11.7m, just ahead of Manchester City boss Roberto Mancini on £10.8m.