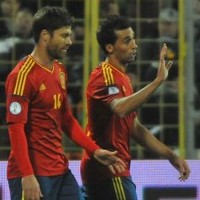 Barcelona forward Pedro Rodriguez netted a hat-trick as Spain comfortably made it two wins from two in World Cup qualifying with a thumping victory over Belarus in Minsk.

Jordi Alba gave the world and European champions a 12th-minute lead as he was allowed to race onto Pedro’s back-heel – despite appearing to be in an offside position – and round goalkeeper Sergei Veremko before slotting home.

Eight minutes later Pedro latched onto a lovely pass from David Silva and dinked over the advancing Veremko, and the Tenerife-born player completed his first international treble with two further goals in the final quarter – first a lob from Xavi’s pass following a swift counter-attack and then another neat finish 18 minutes from time.