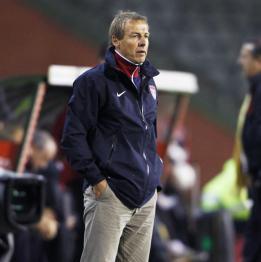 United States coach Jurgen Klinsmann is without a win in his first three games after his side lost 1-0 to Belgium in Brussels.

The USA drew with Mexico and lost to Costa Rica in home games under Klinsmann and lost their first away game under the German on Tuesday night.

Nicolas Lombaerts’ half volley in the 55th minute was the only goal in a friendly match dominated by the Belgians against an inexperienced USA team.

Klinsmann has limited time to assemble the players who will play in the World Cup qualifiers that start next June.