Reports are out claiming that Manchester City captain Vincent Kompany is out of Belgium’s World Cup clash with South Korea with a groin injury. 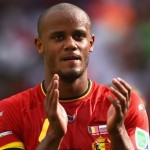 The central defender trained for some 25 minutes at the World Cup stadium late Wednesday but pulled out to avoid further damage, coach Marc Wilmots said.

Since Belgium are already through to the second round, Wilmots had already considered giving Kompany rest to complete his recovery.

The second round is not until after the weekend and Kompany is hopeful to return in time to lead his side.