Reports are out claiming that Arsenal right-back Hector Bellerin is confident that the Gunners have the quality to take on the big teams if they qualify for the knockout stages of the Champions League. 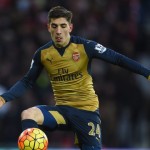 The 20-year-old Spaniard is certain that the return of important players from injuries will make Arsenal a force to be reckoned with in the tournament if they can successfully navigate Olympiakos in their final Group F fixture in December.

When asked after the 3-0 win over Dinamo Zagreb whether Arsenal will be a threat if they qualify, Bellerin said: “Yeah I think so.

“The team have shown it all through the season. There’s a lot of creativity, a lot of quality up front, and we’re defending very solidly.

“Games like this show what the potential of the team is and when we have all the players back [in addition to the team we have already], I think we’re going to be a team that’s going to be up there.”