Reports are out claiming that Hector Bellerin was thrilled with the performances of central defensive duo Calum Chambers and Gabriel Paulista on Monday night. 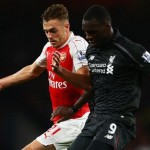 The pair replaced usual Arsenal centre-backs Laurent Koscielny and Per Mertesacker as the Gunners drew 0-0 with Liverpool at the Emirates Stadium and right-back Bellerin felt they provided a decent showing against the likes of Christian Benteke, Roberto Firmino and Philippe Coutinho.

“I think they had a good game, the fact that we are going home with a clean sheet says a lot,” said the Spaniard.

“It is difficult to be thrown into a game like this when you haven’t had a lot of game time. I think they did really well, them and the whole team.”

Bellerin added: “There were some times when we had trouble getting the ball out from the back, but I think we dealt very well with their front three.

“They had a lot of power up front and the fact we are going home with a clean sheet says a lot.”