It has been revealed that Hector Bellerin is set to make his first Premier League start this season. 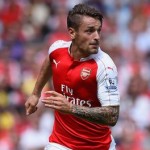 The Spanish right-back missed Arsenal’s 2-0 opening weekend loss to West Ham United with a thigh injury but is expected to be available for Sunday’s trip to Crystal Palace.

The speedy 20-year-old has now recovered from the issue sustained in pre-season and could possibly replace Mathieu Debuchy in Arsene Wenger’s starting lineup at Selhurst Park.

If not in the initial XI, Bellerin will certainly be fit enough to make the bench as the Gunners look to bounce back from Sunday’s disappointment against the Hammers.