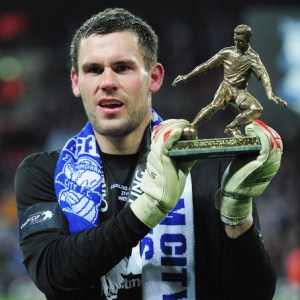 The former Manchester United and England international goalkeeper was named man of the match, just as he was for the Red Devils in the 2009 win against Tottenham.

He said: “We kept plugging away and got what I think we deserved. It was a fantastic result.

“Going into games like this with United, it is expected you will be winning trophies and winning matches.

“But, with a team like Birmingham, it is against all odds and we are not expected to win.

“It is just a great achievement to get here, and to actually win it against a quality side like Arsenal is amazing.”