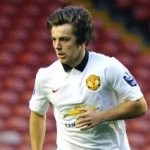 It has been reported that Manchester United midfielder Ben Pearson hopes to catch the eye of manager Louis van Gaal.

Pearson has been encouraged seeing several youngsters get their chance this season.

“The manager has played a few youngsters already,” he told manutd.com.

“Tyler [Blackett] has been playing regularly and Reece James has played. A few of the lads were involved against MK Dons and, hopefully, all of us can come through.

“The manager has done it previously at Ajax and Barcelona and I hope he can do it here. There are a few young lads pushing for first-team places. It is all about getting an opportunity. There are always lads going up and training with the first team. You’ve just got to impress in those training sessions.”