It has been reported that Ben Sheaf has signed pro terms with Arsenal. 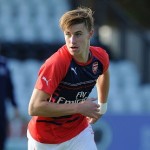 The midfielder, who turned 17 last week, only joined the Gunners last summer from West Ham United.

A statement from Arsenal read: “Everyone at Arsenal would like to congratulate Ben on his first professional contract and looks forward to his continued development at the club.”

Sheaf is an established member of Arsenal’s Under-18 side, making 12 appearances in the youth Premier League.