Bendtner : We Can Beat Barcelona 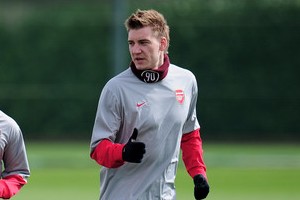 Arsenal striker Nicklas Bendtner believes that Barcelona’s defence is their for the taking this week.

Centre-backs Gerard Pique and Carlos Puyol will unavailable through suspension for Barca for their Champions League quarterfinal second-leg clash.

Bendtner told reporters that : “For any team to be without their two central defenders, the two players who play week-in week-out, you know they are people they build the team around and it is not good for them – it is good for us.

“We saw Barcelona play obviously and they are a great passing team. We have to try to get a little tighter to them and not give them so much time to play.

“People are expecting it to be a difficult game for both teams. It is going to be a hard game. We will see who wins on Tuesday.

“But we think we can do it. This is a trophy we want to win and to win the Champions League you have to beat the best teams.”


Eric Abidal : Theo Walcott Is Not A Threat To Barcelona