It has been reported that Benfica are insisting on only a cash deal for winger Nicolas Gaitan. 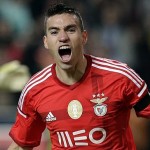 The Argentine international has been linked with Atletico Madrid and Manchester United this summer.

AS says Atletico are preparing for life without Turkey international Arda Turan and they have identified Gaitan as the man to replace him.

Negotiations between Benfica and Atleti are open, but the two clubs are apart in their valuation of the player.

Benfica want €30m for the Argentinian and are unwilling to accept the inclusion of any Atleti players as makeweights in the deal.

United will move for Gaitan should they find a buyer for Angel di Maria. Luke Shaw On The Verge Of Making Man Utd Return