Reports are out claiming that Benfica are moving for Chelsea midfielder Marco van Ginkel. 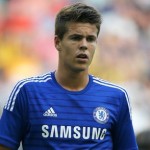 The young Dutchman has turned down a loan move to AC Milan in the last 24 hours, despite being frustrated by his current status in Chelsea’s midfield pecking order.

Record reported that Benfica chiefs have been encouraged and hope to tempt Van Ginkel to Lisbon for the season.

The youngster missed the entire last season with a knee injury and is eager to make up for lost time.

Van Ginkel is yet to see first tem action for Chelsea this term. I Am Very Happy At Chelsea – Cesc Fabregas