Reports are out claiming that Benfica coach Jorge Jesus is driving their pursuit of Manchester United attacker Bebe. 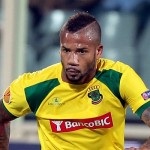 Record says Jesus is keen to sign Bebe, convinced he can build on the attacker’s success with Pacos de Ferreira and develop his game further.

For the moment, Bebe is expected to remain part Manchester United’s US tour squad, which kicks off later this week.