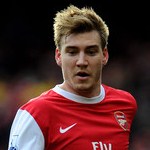 The Daily Mail has reported that the Portuguese giants are showing interest in the Danish striker who has already been linked with Fulham and Bundesliga duo Bayern Munich and Borussia Dortmund.

However, none of the clubs are willing to match the Gunners valuation of £12m leaving the door open for the Portuguese side to launch a new bid.

Bendtner’s father Thomas says Dortmund are keen but it is understood they believe the 23-year-old to be worth £7million.