Reports have emerged claiming that Benfica will need Liverpool to contribute to Lazar Markovic’s wages if they’re to re-sign him this summer. 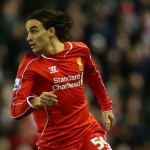 The Serbia international winger is being linked with a return to Benfica this week.

The Lisbon giants are keen, but Markovic’s €2 million salary would smash their wage ceiling.

Instead, should Liverpool show a willingness to part with the Serb, Benfica will push the Premier League giants to cover a percentage of his wages.

Benfica are eyeing the midfielder as a potential replacement for Manchester United target Nicolas Gaitan.

Steven Gerrard Happy To Be Back In Action With Liverpool