It has been reported that MK Dons striker Benik Afobe sees his future at parent club Arsenal. 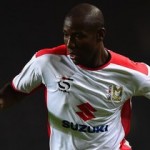 The 21-year-old joined the League One club on a season-long loan in the summer and has already scored 15 goals in 20 appearances – including three braces.

He told arsenal.com: “You can train as much as you want, and you can work as hard as you want, but if you’re not playing games you’re not going to improve. Playing every week shows you’re ready to be playing men’s football.

“At the moment I’m enjoying my football but I want to go back to Arsenal in the summer with my head held high and happy with the season I had. I want to prove them right because I know they believe in me.”