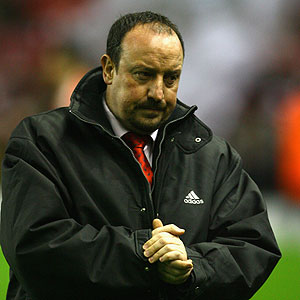 Liverpool manager Rafael Benitez saw his side torn apart and admitted that his team has never played worse.

Liverpool fell to two first-half goals from Fiorentina wonderkid Stevan Jovetic,now age 19 and were lucky not to lose by a bigger margin.

Benitez said that he has never seen Liverpool struggle so badly as in the first half and it was was a poor performance.

Benitez also added that Fiorentina were on top of Liverpool all the time and that Liverpool did not do things as planned.

The Spaniard added that when mistakes are made, them the team will have to pay for it and that is exactly what happened.

Benitez also said that he had to change everything and the second half was much better but it was too late by then.

Jovetic made the most of some awful defending to throw Group E wide open and he beat the offside trap to slot past Pepe Reina and then reacted quicker than Martin Skrtel to prod Juan Vargas’ cross-shot home.

Boss Benitez added that Liverpool knew that Jovetic is a very good player and that he was expected to be busy but Liverpool gave him too much of an opportunity.

Benitez called on his troops to show their true colours in Sunday’s trip to Stamford Bridge and assured that the fans will see a totally different Liverpool against Chelsea in the league.