Reports are out claiming that Real Madrid boss Rafa Benitez insists striker Karim Benzema will not depart the Santiago Bernabeu this summer, despite continued conjecture regarding his future at the club. 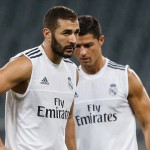 Arsenal are the latest club to be linked with the 27-year-old French international, but Benitez has remained steadfast in his belief that Benzema will remain a Madrid player.

“My answer is that I think Benzema is going to stay with us,” Benitez said.

“I’m very happy with him. There’s no reason to think that he’s going to go.”

It was believed that the Gunners were set to break their £42.5million transfer record in order to bring Benzema to north London but to add to Benitez’s comments, Arsene Wenger played down those suggestions when quizzed on the matter after his side’s Community Shield triumph on Sunday.

Mesut Ozil : I Need Not Be Afraid!