Benitez Fears Getting The Sack 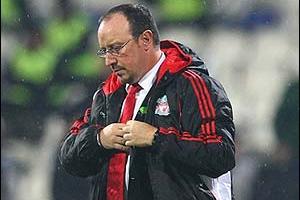 Rafael Benitez has admitted for the first time that he fears for his Liverpool job.

Benitez got the dreaded vote of confidence from co-owner George Gillett yesterday as it emerged it would cost £13 million to axe him.

However Benitez knows that he is on the brink after Tuesday’s defeat at home to Lyon.

Benitez told reporters that results dictate in football and that everyone must try to isolate themselves from talks of a possible purchase of the club and concentrate on the day-by-day work in football terms.

The Spaniard added that a sale and a change of owner is always hugely important for any club and that his relationship with George Gillett are very correct.

Benitez added that he love being at Liverpool and that his family is very integrated with the life here and it is not on their minds that it will end soon.

On Tuesday night he was booed by his own fans as defeat to Lyon left Liverpool staring at a Champions League KO.