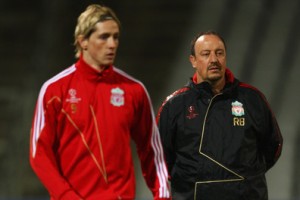 Rafa Benitez has no doubts Fernando Torres will be staying with Liverpool.

The Spain international striker, who is currently in a race against time to be fit for the World Cup after a knee operation, has been linked with a move to Premier League champions Chelsea.

However Benitez is confident that Torres will decide to stay when he makes a decision after the World Cup.

Benitez recently told reporters that : “I am not aware that Torres wants to leave,”.

“Now he is only focusing on recovering and going to the World Cup, only then will he think about his future.”

Benitez added that Torres’ importance to Liverpool goes far beyond his actions on the pitch, saying: “Torres has multiplied the Liverpool image in Asia because all the women there are crazy about him.”