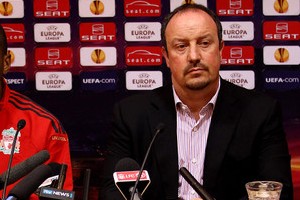 Liverpool manager Rafael Benitez has revealed that he is not focusing on his career at the club, rather just the next match.

That match is Thursday night’s Europa League semi-final second leg against Atletico Madrid at Anfield which the Reds trail 1-0 following the first leg.

However Benitez is not being drawn in by speculation regarding his future at Liverpool and is only worried about getting his team to the final of the competition.

Benitez said that : “I have spent a year listening to names like Martin O’Neill, Jose Mourinho, Jurgen Klinsmann and Frank Rijkaard being linked with Liverpool, but I’ve just kept doing my job,”

“All my focus is on is the next game, that’s the future for me, but no-one from the club has spoken to me about mine. My future is this game.

“For me the next game is always the most important and playing in a European final again would be massive for any club. Atletico is massive and that’s what we have to concentrate on.”