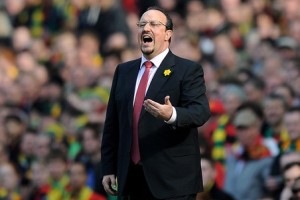 Liverpool boss Rafa Benitez has admitted that Manchester United are now competing on a different level.

United have been a dominant force in the Premier League since its creation, winning 11 championships under the stewardship of Sir Alex Ferguson.

And while Liverpool can reflect on their glory years during the 70s and 80s, Benitez believes renewing success at the club is only possible by investment in the playing squad – which he believes will narrow the gap that exists on the pitch between the two sides.