It has been revealed that Real Madrid boss Rafa Benitez is ready to see Asier Illarramendi sold this summer. 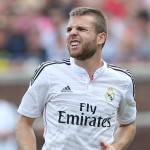 The Spain international struggled to make an impact under former Real coach Carlo Ancelotti during his two years in charge, but had hoped for a clean slate under Benitez.

Waiting in the wings is Liverpool boss Brendan Rodgers, who has followed Illarramendi since his time with Real Sociedad.

La Real are also keen, but won’t be able to compete with Liverpool’s spending power should Rodgers make his interest concrete.