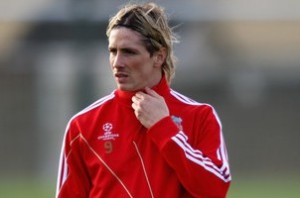 Liverpool manager Rafael Benitez confirmed that star striker Fernando Torres was not injured even though he brought him off halfway through the second half in the 1-1 draw with Birmingham City.

Torres looked disappointed with the decision but Benitez said that it was more a precautionary thing to keep his leading goalscorer fresh for the run-in to the end of the season.

When asked by reporters if Torres was injured, Benitez answered : “Was Torres injured? No, he was exhausted. He had some ice just to protect his knee, but he was really tired, like the other players who played on Thursday against Benfica,”

“He knew we needed to win, but he was really tired, like all the players, and N’Gog had fresh legs, as did Ryan Babel, and that made a big difference in the last few minutes.”