Reports are out claiming that Real Madrid want Martin Odegaard to stay with the Castilla. 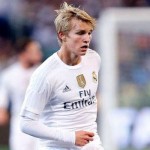 AS claims that Real Madrid want Ødegaard to remain patient and continue for another season with Zinedine Zidane’s Castilla.

The club are trying to persuade the young midfielder to change his mind and stay under Zidane’s wing at Castilla and not spend the new season out on loan (Getafe have put in an official request for him).

The club has told him that he will still be able to train with the first team as he did last season under Carlo Ancelotti and he will get some first team action, for example in the Copa del Rey.