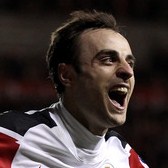 Dimitar Berbatov feels he is in the form of his life after bagging a double against Blackpool last night.

The Manchester United striker made it five goals in two games but he feels his best football is ahead of him.

He said: “Personally, I hope this is not the best football of my career – I hope the best is still in the future in a United shirt.”

But Berba conceded: “The substitutions did change the game. Giggs has experience and his cross was excellent and Chicharito just wants to score goals – but it was the team spirit that won the game.”