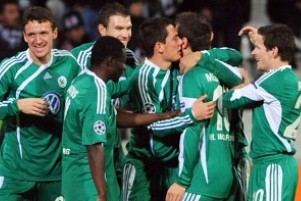 Goals from Zvjezdan Misimovic, Christian Gentner and Edin Dzeko guided Wolfsburg to an emphatic victory in Turkey, although the German side have yet to secure their place in the knockout stages of the Champions League.

The Bundesliga side threatened to run their hosts ragged in a blistering opening when they were rewarded with a goal by Misimovic but they had to wait until the final 10 minutes before they wrapped up victory with two further strikes.