Reports are out claiming that Besiktas President Fikret Orman has revealed that star midfielder Oguzhan Ozyakup will not be leaving the club in January. 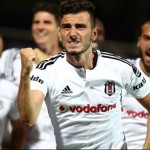 Ozyakup has managed to earn the reputation as one of the finest young midfielders in Europe since making a move from Arsenal to Besiktas in 2012.

As a result, Ozyakup has been linked with a move back to the Premier League with the Gunners and Manchester United said to be interested, but to quash any possibility of the 23-year-old leaving Besiktas this winter, Orman has categorically stated that the move will not happen.

Orman told Fanatik: “He will not be leaving over the winter.