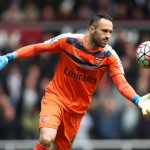 Reports are out claiming that Besiktas are moving for Arsenal goalkeeper David Ospina.

The Mirror says Ospina is determined to leave Arsenal this summer – and Besiktas are offering him an escape route to Turkey.

Arsenal keeper Ospina, 27, is fed-up of being second choice to Petr Cech and has made it clear that he is set on finding a new club.

Besiktas wanted the Colombia keeper last summer and are back in the hunt again after sounding out his representatives about a potential £3million deal.

Ospina has led pals at Arsenal to believe that he is definitely going and has received several offers with clubs in France watching developments while there has been some interest from Everton. Wenger : Wojciech Szczesny Is Arsenal’s No.1