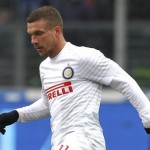 Reports are out claiming that former Inter Milan striker Oliver Bierhoff says Arsenal attacker Lukas Podolski made a mistake moving to the Nerazzurri.

Podolski has struggled since his loan switch in January.

“When I heard that he’d be going to Milan for six months, I felt bad for him. It seemed like a mistake,” Bierhoff told Bild.

“I know full well it’s not easy to change club in January. Football is not the same sport in every country.

“Lukas is a very emotional guy and he needs to feel confidence around him. I advise him to join a club where there is faith in him and he can play consistently.

“Going to a top club means dealing with teammates who are trying to elbow you out of the way to get into the starting XI.

“Lukas, on the other hand, has to feel as if the club is family and he can relax.” David Moyes Has No Regrets Missing Out On Ozil, Thanks To Adnan Januzaj