Reports are out claiming that Arsenal attacker Theo Walcott rates their clash with Tottenham among the biggest in recent seasons. 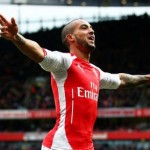 The Gunners have not lost since their New Year’s Day defeat at Southampton.

Walcott told the London Evening Standard : “I think it is an even bigger game this year than ever,”.

“Tottenham are doing very well, getting those last-minute goals which shows a knack of getting important three points. It will be two very strong teams that are very high on confidence so for the neutral it will be a very interesting game.

“It is going to be difficult to call but if we play the way we did against Villa, hopefully, it will be ours. A draw wouldn’t be a terrible result but we always play to win.

“They have been very comfortable on the ball, passing it well and pressing it high up. He [manager Mauricio Pochettino] likes his sides to be right on you from the start and they are difficult to break down. They have got a fantastic goalkeeper in Hugo Lloris, who is very sharp off his line. He is making some fantastic saves.

“And, of course, they have [Christian] Eriksen, who has been one of the most underrated players in the Premier League this season. He has stood out but we have Santi [Cazorla], who is also in great form and not always getting recognition, either. ”