It has been reported that West Ham United manager Slaven Bilic believes Saturday’s opponents Manchester United are a different team than they were during the Sir Alex Ferguson era, but have not lost their effectiveness under new boss Louis van Gaal. 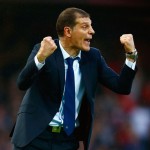 Bilic admitted that while United no longer played the same brand of attack-minded football as they did while Ferguson was at the helm, he still believes they are a tricky proposition under van Gaal’s tutelage.

“They are different from the team of the Ferguson era, especially at home,” Bilic said.

“United used to be more electric, quicker, playing more vertically. Bombing around the box and in the box.

“But narrow victories are victories. They are winning. They are not conceding goals. Somebody said they are boring but they are having the ball. That is defending.

“They are controlling the game and trying to win it. So you can say that they are different than before.

“So I don’t find them boring or whatever. It is very effective football and they are very hard to beat. I watch many games. They are always on TV and in every game they have more chances than the opponent.