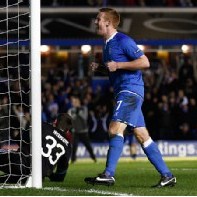 Birmingham bowed out of the Europa League despite Adam Rooney’s goal earning a 1-0 victory over Maribor in their final Group H encounter at St Andrew’s.

Club Brugge and visiting Braga went through to the last 32 after their 1-1 draw in Belgium, finishing one point ahead of Chris Hughton’s side.

It was a brave effort by Blues, for whom Rooney settled the encounter with a first-half header – his first goal for four months – from Nathan Redmond’s fine cross.

Redmond caused all kinds of problems throughout the 90 minutes on the right flank and the 17-year-old supplied a string of teasing balls into the Maribor box.

On this evidence he will have a big part to play when City resume their challenge for promotion from the npower Championship.