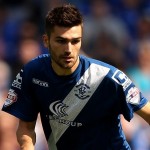 And Rowett lavished praise on the youngster: “For me he was the best player on the pitch in terms of his composure and his vision,” Rowett said.

“He is a young player, he is only 20 playing in the Championship and starting games for the first time.

“At Brentford last year he made about 35 appearances but only seven or eight were starts.

“He did really well early season then perhaps hit a little bit of a dip, which young players are going to do.

“I just felt it was the right time to get him back in the side. He was brilliant today, he took his goal fantastically well, it was a great finish with his wrong foot and he set another goal and a lot of chances up.

“He is a confident boy anyway, he has played at Barcelona and Arsenal so he should be very confident. Sometimes it’s piecing some of the other sides of the game together.

“I have asked him to be a little bit more intense the way he presses the ball around the pitch and also the way he defends for the team.”