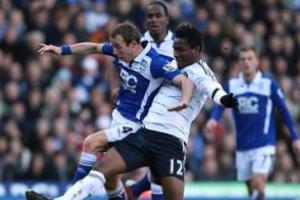 Chelsea’s run of poor form continued as the Premier League leaders were held to a 0-0 draw at Birmingham City.

Keeper Joe Hart was the hero for the hosts after denying both Frank Lampard and youngster Daniel Sturridge in the first-half, while Alex struck the Birmingham crossbar with a superb 40-yard free kick.

Birmingham thought they had broken the deadlock when Christian Benitez stabbed home Liam Ridgewell’s ball, only to be denied by a contentious offside decision.

Florent Malouda saw red for a second bookable offence late on, but neither side could break the stalemate despite six minutes of stoppage time.