It has been revealed that Birmingham City have signed goalkeeper Tomasz Kuszczak following his exit from Wolverhampton Wanderers. 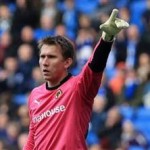 The 33-year old Pole has signed a two-year deal with the Championship club after making 13 appearances for Wolves last season. Robin van Persie Out For One Month With Thigh Injury