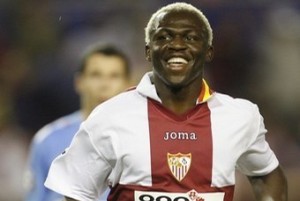 It is believed that the Ivory Coast striker, now age 25 has fallen down the pecking order at the Spanish side and Birmingham is interested in taking the striker on loan.

The injury-prone striker cost Sevilla £9million from PSG in 2004 and the striker has played a total of 30 matches for Sevilla and scored only 1 goal.

Mauro Camoranesi On The Verge Of Joining Birmingham City